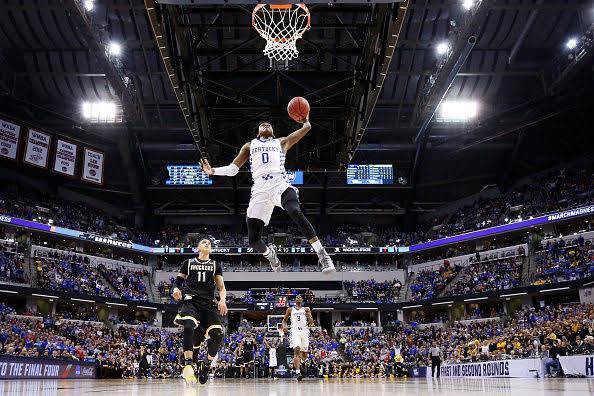 When the season began, before I knew that ESPN was going to be the national network for Kentucky basketball (don’t have a problem with it, just saying), the question quickly came up in my head… Which one of these two phenoms, De’Aaron Fox or Malik Monk would not only stand out more, but also who would have a more successful career in the NBA.  I Like to put myself in the scouts shoes, or better yet the GM.  I think we all do…

Anyway let’s say you have the 6th maybe the 7th pick in the draft, both are available. Both are young, talented and super athletic.  So which one will be the better long-term choice for your franchise?  Very early on in the season, I quickly discussed with fellow contributor Stu Coleman that I myself, would choose Fox over Monk and here is why. Firstly, he’s a facilitating point-guard who can score, my favorite type of player.  Secondly, he can also play off the ball and has enough height and length at the off-guard position to sustain minimal, yet effective minutes. I just feel he is a more dynamic basketball player both now and at the next level.

Now onto his counter part Malik Monk.  This is is no way a bashing of the super scintillating freshman (Do not read that in a Dicky V voice), but when you have to break it down and evaluate, I mean really choose between the two players, here is what I see.  Malik is a super talent, just not quite as athletic as then UNC commit JR Smith, but he’s right there.  Another area where our boy bears intriguing similarity is the knucklehead category.  That’s actually my nickname for JR ever since he was a Knick.  Yup, “Knucklehead”.  For every bright moment such as back-to-back game winning shots and salsa dancing, JR seemed to be marred with just as many if not more negative ones.  He just does dumb things at inopportune times that take away from how good of a player he really is.  Look no further to JR spending a night out with Rihanna during the Knicks 2013 playoff run.  I know it’s Bad Girl RhiRhi but c’mon JR, it’s the playoffs.  Play your cards right ma man!  Show some dedication to your team, some strength and self-control and she might be “tryin to get the pipe” sooner than you think.  Girls like that type of stuff, trust me, I know.

Do I think Malik Monk surpasses JR Smith in that category?  No I do not, but Malik is a tough shot maker who’s style of play can be considered somewhat erratic and at times has gone something like 4 games without a rebound.  You can check up on that stat, but I heard something along those lines this season that left Around The Horn and PTI staff befuddled as to how someone that athletic can go so long with so little.

Anyway, back to the story at hand. De’Aaron Fox took no BS in Kentucky’s 2nd round match up versus #10 seeded Wichita State.  Below is his most memorable freshman moment.   I believe we may see a couple more by the end of this tournament as I have the Cats going deep in the Final Four.  Watch as De’Aaron hesitates, soars and then absolutely abuses the competition.

De’Aaron Fox looking to close this thing out 😳 pic.twitter.com/EnvpswM0TG

You see what I’m saying?  The boy is bad to the bone and NBA ready.  I’m giving good grades across the board both out the gate and down the line for De’Aaron Fox in the NBA.  Now I don’t really tout myself a UK fan, but I’ll be rooting for this squad to make it far in the tourney if not win it all.  It may get confusing if they face off with all-time favorite UNC, but til then let’s just enjoy the ride and find out what happens next on “The Adventures of Monk & Fox”.  (I should trademark that bitch).

Zion Williamson is the Truth!!!

Link is Below – The Adventures of Monk & Fox limited...