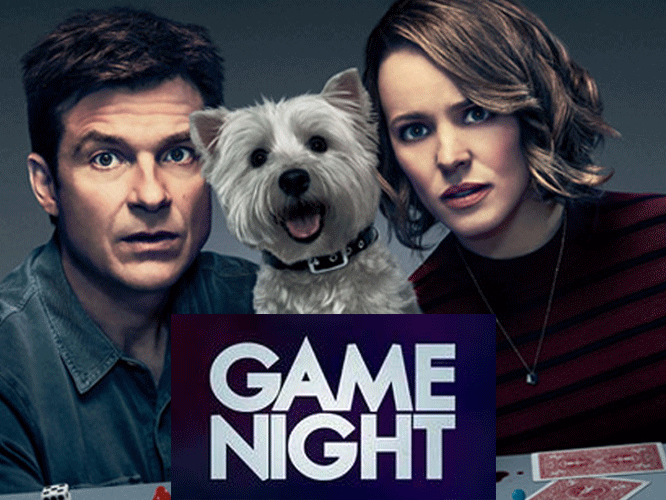 CASTINGS: 5/5 – I WOULD NOT QUESTION ANY CASTING IN THIS FILM.
LOL:  HELL YES.  I LAUGHED A LOT.
STORY: GOOD, FRESH, ORIGINAL.
HUMOR:  FUNNY AS FUCK. 🙂
ORIGINALITY:  YES, EXCEPT ONE JOKE THEY RIPPED FROM ‘NIGHT AT THE ROXBURY’.
WHO TO SEE IT WITH:  FRIENDS, PARENTS, GIRLFRIEND, GIRLFRIEND’S PARENTS, ANYONE REALLY.
FIRST DATE WORTHY?:  MOST DEFINITELY.  GRAB A DRINK OR TWO BEFORE OR AFTER AND YOU’LL PROBABLY END UP DOING OBSCENE THINGS TO EACH OTHER AFTERWARDS.  SHE’LL LOVE YOU FOR PICKING SUCH A FUNNY MOVIE FOR YOUR DATE.  OR HE’LL LOVE YOU, WHATEVER.
OVERALL: 4.5/5 (hipeRATED!)
COMMENTARY:

I’m pretty critical when it comes to… well just about everything, but I am even pickier with my movies and what I give me seal of approval to.  So what gives GAME NIGHT the highly coveted hipeRATED badge of honor?  A lot of things.  It’s just well written, original, well casted and laugh out loud funny.  Jason Bateman does his thing after putting in years of hard work on ‘The Hogan Family’.  His career got quite for a while there but was finally reignited with cameo’s in ‘Dodge Ball’ and then finally with a leading role in ‘Arrested Development’.  Since then it’s been smooth sailing for Bateman who experienced success in both Horrible Bosses films, A Christmas Party in which he got to make out with Olivia Munn and most Recently in ‘Ozark’ which has season 2 scheduled to release sometime in like 2018 on Netfilx.  Rachel McAdams proves she’s got plenty left in the tank while Lamorn Morris and Billy Magnussen lead the comic relief.  Sharon Horgan and Kyle Chandler also do a great job fulfilling their roles.  There’s really nobody who did a bad job in this movie.  I also have to tip my hat to Jesse Plemons for his acting chops.  I don’t want to say anything else because I don’t want to ruin some of the mini surprises that will leave you saying “Oh Shit, HAHA!” and they do add to the quality of the movie.  So bottom line go see this movie, in the theaters, its better that way and worth the price of admission.  Final verdict.. ‘Game Night’ delivers – in fact, it may be a classic.  I can’t wait to see it again on Comedy Central.

Review of Ecom Dave’s Amazon FBA Academy: Is It a Scam or Worth Your Time and Money in 2023?